The prudential regulations of the Central Bank of Chile establish certain minimum requirements, so that the different entities subject to it carry out their activities in such a way that the risks inherent to their activity be under control, and thus the probability of their dissemination towards the other entities of the financial system be reduced.

In accordance with its legal mandate and the powers conferred on it by its Constitutional Organic Law as well as by other legal frameworks, the Central Bank of Chile dictates prudential regulations for:

These regulations are contained mainly in the Compendium of Financial Regulations

However, it must be borne in mind that the prudential regulations issued by the Central Bank of Chile are related to its legal mandate, and that compliance with them must be monitored by the Financial Market Commission.

The so-called Financial Market Infrastructures enable the recording, clearing and settlement of monetary and financial transactions, strengthening the markets they provide services to and playing a key role in promoting financial stability. Nevertheless, if not properly managed, they can pose significant threats to the financial system and be a potential source of contagion, especially in times of stress.

According to internationally accepted definitions, there are currently five kinds of Financial Market Infrastructures that support the functioning of capital markets, the financial system and the economy:

Large value payment systems enable the transfer of funds and payments of large value and importance for the economy between the participants of the respective system.

The Constitutional Organic Law entrusts to the Central Bank of Chile the duty of ensuring the stability of the currency and the normal functioning of internal and external payments. In order to achieve this, the Central Bank of Chile has a series of powers, particularly Article 35 No. 8 empowers it to authorize and regulate the operations of interbank payment systems based in Chile, as well as to recognize payment systems based abroad, among other provisions.

In exercising these roles, the Central Bank of Chile has sought to increase the security and efficiency of payment systems, considering for this purpose the application of the principles, standards and minimum requirements recommended by international organizations in charge of promoting and assessing these matters.

In Chile, Large Value Payment Systems are made up of:

A Transaction Repository is an infrastructure that keeps centralized electronic record of Over-The-Counter derivative transaction data. Its functions consist in collecting, storing and disseminating information relevant to the market and its regulators.

The Central Bank of Chile established the regulatory framework that incorporates the first Transaction Repository designed according to internationally accepted standards, dubbed “Integrated Derivatives Information System”, which is directly managed by the Central Bank.

Central Counterparties intervene between counterparties to contracts traded in one or more financial markets, ensuring that all open contracts are honored. In addition, Securities Settlement Systems enable the transfer and settlement of securities by account entry in accordance with a set of multilateral rules.

These entities are regulated and supervised by the Financial Market Commission and are governed by Law No. 20,345 on “Clearing and Settlement Systems of Financial Instruments”. Moreover, according to Article 10 of said Law, the Financial Market Commission requires a prior favorable report by the Board of the Central Bank of Chile on matters of its jurisdiction in order to issue the operating rules for these entities, as well as their subsequent amendments.

These infrastructures provide securities accounts, centralized custody services and asset-related services. In Chile, these functions are performed by the Central Securities Deposit. This entity is regulated and supervised by the Financial Market Commission and is governed by Law No. 18,876. 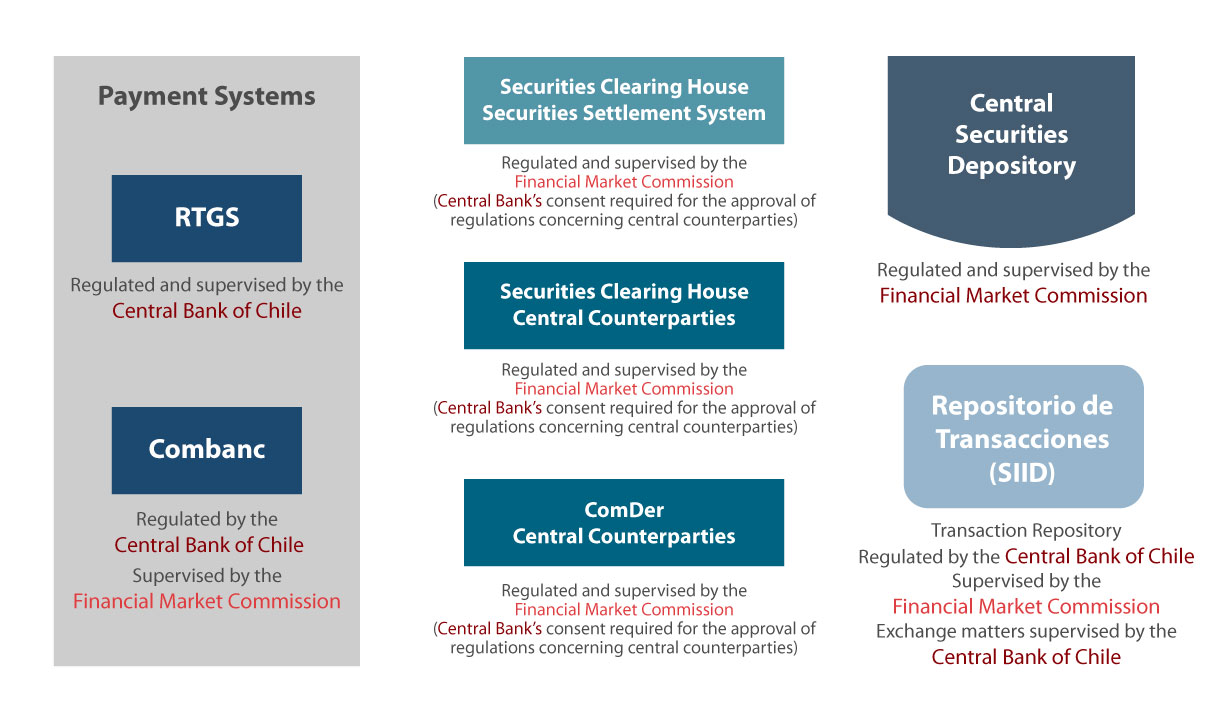 Banks are the only entities authorized by law to collect funds from the public on a regular basis. In this way, they carry out financial intermediation and transform maturities, by receiving deposits payable in the short term and granting long-term loans. This, in conjunction with their usually high levels of leverage, makes banking institutions subject to more numerous and intrusive regulations than those of other industries.

In order to fulfill one of its fundamental objectives, the Central Bank of Chile has been granted powers that enable it to issue regulations on a series of matters concerning banks and, in this way, ensure the normal functioning of internal and external payments. Likewise, as determined by law, certain regulations of the Financial Market Commission (the authority that supervises and regulates banks) require the opinion of the Central Bank of Chile before their issuance. The foregoing attributions derive mainly, but not exclusively, from the Constitutional Organic Law of the Central Bank and the General Banking Law.

The regulations of the Central Bank of Chile applicable to banking institutions are as follows:

The Central Bank of Chile monitors and regulates aspects of the Chilean financial market with the objective of maintaining the stability of the financial system in order to contribute to the welfare of Chilean families.

To this end, the Central Bank of Chile has been granted regulatory powers over various financial market agents, such as pension fund administrators, insurance companies and the unemployment fund administrator.

In addition, the Central Bank of Chile also regulates aspects of derivative operations carried out by financial institutions in the local market.

Financial Innovation and Means of Payment

Financial Innovation and Means of Payment

In a changing environment, it is in the interest of the Central Bank of Chile to keep up with the different innovations that may affect financial markets, which are within the scope of its jurisdiction, both domestically and internationally, in order to have an adequate policy response, if necessary.

This certainly involves financial innovations enabled by technology (“Fintech”), but it is not restricted to them. Developments that may take place in other areas, such as new financial products, legal or regulatory changes, or innovations in existing financial services, are also relevant.

Regarding retail means of payment, the Constitutional Organic Law confers upon the Central Bank of Chile the power to issue financial regulations, including those governing companies whose business consists in the issuance or operation of credit cards or any other similar system and which are under the supervision of the Financial Market Commission.

In this context, the Central Bank of Chile regulates the Issuance and Operation of Payment Cards.

Having as a guiding principle the legal mandate to ensure the normal functioning of the payment system, the rules of the Central Bank of Chile, which were updated in June 2017, seek to contribute to the expansion of the retail payments market, so that a greater part of the population can benefit from the use of electronic means of payment, under appropriate security conditions for the different economic agents involved in its functioning.

The regulations of the Central Bank of Chile applicable to the Issuers and Operators of Payment Cards are as follows: