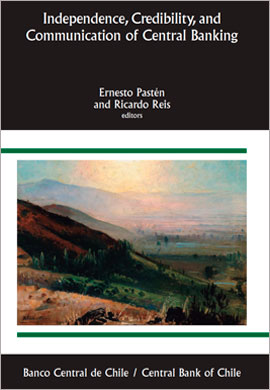 The three topics covered in the title of this volume have proved to be critical in the remarkable success of modern central banks around the globe in the fight to control inflation and smooth macroeconomic fluctuations. Despite these achievements, some old challenges have come back in recent years and new ones have appeared to make Independence, Credibility, and Communication of Central Banking as critical as ever—perhaps, even more so. This volume collects articles contributed by distinguished scholars to the XXIII Annual Conference of the Central Bank of Chile, which coincided with the thirtieth anniversary of its independence. The chapters in this volume give a fresh new look to old lessons, discuss the latest developments, and provide new recommendations for central banks to meet some of their biggest challenges of the times. dynamics.

Central bank independence, credibility, and good communication sound like nobrainers. But when you look deeper, you see that the issues are much more complex. What does independence actually mean? How is the governing board nominated? Is it ok to have an independent central bank when it is in charge of macro-prudential policies? How is it supposed to weigh activity versus inflation? Can it be truly independent if, as is the case now, it has to work closely with the Treasury? How does its credibility depend on the stance of fiscal policy? Should the members of the governing board be free to express their own opinions outside the bank? Or should the central bank speak with one voice? These issues, and many others, are the topics covered in this outstanding book. It should be required reading for anybody involved in the art of central banking.

The Central Bank of Chile’s conferences have made their mark, the choice of topics for this volume could not be better, and the list of authors reads like a Who’s Who of experts. Dig in and sample the fare. You’ll be rewarded.

An excellent collection of research on an important and timely topic of central bank independence, credibility, and communication. As countries grapple with the Covid-19 pandemic public debt has risen to record highs, which could ultimately put pressure on central bank independence. This book is essential reading for policy makers and researchers as they design and navigate what will be a challenging period ahead for monetary policy.

Independence, credibility, and communication are fundamental foundations of modern central banking. This outstanding collection of frontier research by prominent academics and central bankers not only reassess whether these foundations remain stable and fit for their purpose but also discuss how they can be improved and adjusted to future challenges. The lessons from the book are highly relevant for inspiring future research and guiding future policy. This makes the book essential reading for anyone interested in current and future central banking and for policymakers that lead current and will lead future central banking.

Independence, Credibility, and Communication of Central Banking: An Overview

Fiscal Inflation and Cosmetic Defaults in a Small Open Economy

Central Banking with Many Voices: The Communications Arms Race

The Three Es of Central Bank Communication with the Public